Sadly, Bodie crossed the Rainbow Bridge on 9/22. He came to us in August 2018, a gregarious gent of about 10 years when we discovered a mass on his lung. That made him eligible for our Permanent Foster Program. He graced a few foster homes, all who loved him, and he lived his best life ever – another two years with an active family complete with two boys of his own.

Bodie loved hiking, until the arthritis got so bad that short walks were difficult. In the end it was not the cancer, but the pain and immobility. Bodie let us know it was time to let him go.

I am sure he was met at the Bridge by Blanca who we said good-bye to on that same day.   Hike away Bodie…pain free.  We love you!

Bodie is a wonderful gent of about 10 years who made his way into rescue in August 2018. While waiting for a foster home, he met gal-pal Harlo and they went as a set of bookends into foster care together.  Harlo found her “Happily-Ever-After” when she was adopted, but Bodie’s path had taken a different turn. 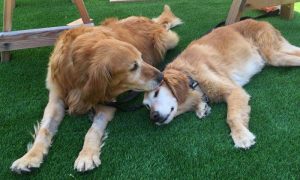 In Bodie’s initial weeks in foster care, what had started as kennel cough at the shelter had developed into pneumonia. A pretty tough strain by his medication regime and length of recovery, but recover he did.  During his stay in the hospital, his chest x-rays revealed not only pneumonia, but a 3 ½ cm soft mass in his right lung. An initial cursory abdominal ultrasound revealed a possible mass on the right lobe of his liver.  Further testing proved no such liver mass present (a full abdominal ultrasound indicated no anomalies) however, an ultrasound guided, fine needle aspirate verified that the mass in his lung was supportive of cancer, we just cannot specify what kind as we do not know the origin. At that time, Bodie was inducted into the Permanent Foster Program.

When Bodie arrived in rescue, it was evident that exercise was not too high on his list. Lacking muscle mass…with a dash of arthritis, Bodie would walk about 10-20 feet at a stretch. His favorite past time was being fed, getting treats, and being the Velcro golden he is…tons and tons of love. Over time, his foster mom started walking him a bit more, and now he is up to two long walks a day, one being at least 2 miles and the other 1-1 ½ miles depending on the day.  He has lost 10 lbs and is stronger than ever! 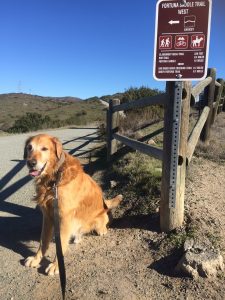 Bodie is currently taking NSAIDS and Gabapentin for his arthritis, which have helped immensely. He still needs a bit of a boost with his back end getting into the car, but once in, settles right down…this boy loves car rides too.

Deciding that Bodie needed a ‘rest of his life’ family, we networked his story through social media and our website. He received a lot of interest and it was not long before his perfect family found him. 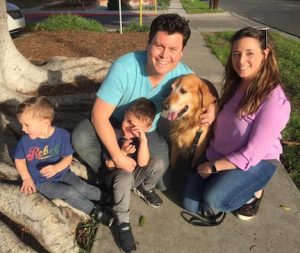 Bodie fit right into family life, never missing a beat.  His new mom says “Bodie is doing fantastic. He is curious and friendly with the kids. He really wants to eat their stuffed animals, and occasionally picks up a car, but he is good about putting it down if told. He is such a sweet dog and is starting to settle in. He decided to sleep downstairs last night since the stairs are hard for him, but he didn’t seem to mind. He was so worn out after a day with kids! We are loving him and are so happy he is here.“